The other day I was watching The Santa Clause 2 Captain EO and could not help feeling reaffirmed in my original assertion that this movie/music video/shameless display of self-aggrandizement is crazy sexist!

There are many things that bother me about Captain EO. Right off the bat, it’s 20 f-ing minutes long. In its original context (a “4D” experience for Disneyland goers), I guess 20 minutes is okay. For me chillin’ on the couch watching some YouTube videos? NOT okay. 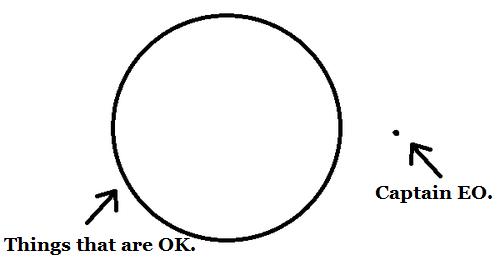 Aside from its absurd length, the first thing that always stood out to me was the fact that Captain EO just ASSUMES the Supreme Leader (hereafter referred to as SL) would even be INTERESTED in having her appearance transformed into what he (and Coppola, Lucas, Disney executives, etc.) deem mainstream attractive. The other thing that bugs me, and this comes from my years of having learned to carefully analyze literature through a feminist lens, is that once she is transformed, she does not speak one single word. She is lovely and she is mute, existing solely for the male gaze. After all, her political power seems to have been dissolved. She is now just another female video casualty, existing for the audience’s aesthetic enjoyment only.

Before we get too deep down the rabbit hole though, and even though I know that you’ve seen it, here is the plot summary from Wikipedia, edited for brevity (I swear, this is edited):

The film tells the story of Captain EO and the ragtag crew of his [shitshow] spaceship on a mission [trying to find Mr. Warren G?] to deliver a gift to “The Supreme Leader” (SL), who lives on a world of rotting, twisted metal and steaming vents [rad]. Captain EO’s [totally incompetent] alien crew consists of [a bunch of puppets not worth outlining] and the clumsy elephant-like shipmate Hooter who always manages to upset the crew’s missions [yet somehow never gets fired or gets his annoying ass beat by the rest of the crew]. Dick Shawn plays Captain EO’s boss, Commander Bog.

Upon arriving on the planet [on which they likely have no business landing], the crew is captured [shocker] and brought before the SL. She sentences the crew to be turned into trash cans, and Captain EO to 100 years of torture in her deepest dungeon. Captain EO [being the cocky chauvinist that he is…we’ll get to that] tells the SL that he sees the beauty hidden within her, and that he brings her the key to unlock it: his song, “We Are Here to Change the World” [forehead slap].

[There is singing and dancing, Hooter fucks up, SL’s Hot Cops come at EO with whips, his lame-ass crew bails, something weird happens and everyone is suddenly dancing in unison.]

Captain EO then flies up to the SL and transforms her [without consent—affirmative or otherwise] into a beautiful woman, her lair into a peaceful Greek temple, and the planet into a verdant paradise. A celebration breaks out to “Another Part of Me,” as Captain EO and his crew triumphantly exit and fly off into space.

Oh my god. What in the actual fuck?

We shall start where I would start when conducting any kind of analysis. Why are there 15 male puppets and only 1 woman in this 20-minute PSA for Patriarchy? Let’s just run the old Bechdel Test. The Bechdel Test asks the following: (1) Are there at least 2 named female characters? Hmmm. (2) Do they talk to each other? Uhhhh…(3) About something other than a man? Welllll…I don’t think Captain EO passes. Which doesn’t necessarily mean it is anti-feminist. It just raises certain questions as to whether the portrayal of gender in the piece perpetuates stereotypes or can be used as an accurate representation of gender roles.

Pause for a hitch–let’s talk a little about The Patriarchy. For our purposes, when I speak of The Patriarchy, I am generally referring to a culture that privileges men by promoting traditional gender roles and perpetuating stereotypes (i.e., men are strong, protective, and decisive while women are emotional, irrational, and weak). What are the implications of such a system? In other words, who cares? Seemed to be working out OK for the Boomers, right? [insert hysterically laughing emoji face here]

The implication lies in the re-articulation of power. I can’t remember where I read it but somewhere on the internet, someone said that an institution gains its status as a mainstay only through its repeated assertion and reassertion. I’m paraphrasing, but you get the point. Repeated exposure to these stereotypes reinforces them, especially on the scale of something like, say, a music video by the King of Pop made into a Disneyland attraction. Yes, we have made progress since 1986 and we continue to do so.

But we’re not talking about discipline tonight.

So why do I think Captain EO is sexist? I mentioned a couple of my primary beefs earlier. Just so you don’t think I’m making this shit up though, I’ll walk you through some of the usual questions I ask myself when I’m reading or viewing something and one of my feminist ears perks up, much like Remo’s when he hears a burrito being unwrapped somewhere. Hmmm, I say to myself, that sounds like something I might be interested in getting into!

Thinking about the SL as our character for analysis, we’ll start with language.

What specific language/words are used to describe her and her actions?
When we first hear about the SL, EO’s boss (Commander Bog) is reiterating to him that all he needs to do is “find the Supreme Leader and give her the gift.” “Give her the gift”—that’s all we hear.

So why does it get so out of control when Captain EO and his merry band of dickheads get to the planet? Because, apparently, they really fucked up their last mission and everyone thinks they’re a joke. EO himself explains:

“the Command considers us a bunch of losers. But we’re gonna do it right this time, ’cause we’re the best. We don’t we’ll be drummed out of the corps.”

Essentially, the heat is on. And if they screw up, they will be humiliated, lose their jobs, their livelihood, and in turn (for EO, at least), their manliness.

Back to the SL. How is her wardrobe used to define her?
She is portrayed as a spider-like creature, suspended from the ceiling and surrounded by cables and tubing. To portray the SL, Anjelica Huston endured three hours of make-up daily. Jackson made her stay in makeup every day, even when they weren’t shooting her scenes.

Methinks thou art a chauvinist.

What kinds of things have an effect on the character?
Let’s examine the following exchange between EO and the SL. This is what takes place between them after she doles out the trash-can-treatment/100 years of torture sentence.

Captain EO: (Remaining strong and unmoved) Your highness, my loyal companions and I accept these punishments…We have come here uninvited and unannounced.

Supreme Leader: So, then we both admit to your … stupidity! Why have you come?

Captain EO: To bring a gift, your highness. To someone as beautiful as you.

Supreme Leader: You think me … beautiful?

Captain EO: Very beautiful within, your highness, but without a key to unlock it. And that is my gift to you.

Supreme Leader: So, let me see this gift.

Captain EO: Not only see, your highness, but hear.

That “remaining strong and unmoved” bit tho…

Taken from the actual script of Captain EO, the parenthetical description is a classic example of the use of traditional patriarchal language. EO is “strong and unmoved.” The SL is literally suspended in the air, hanging from the ceiling. Her presence is vast. But you will see. He is about to flatter her, play to her vanity, uncover her supposed female vulnerability, and thus he will expose her as weak and movable—what a WOMANLY thing to be! Wouldn’t you much rather be manly and unmovable like EO? Barf.

Then there is this fun excerpt. Bold lines are my commentary.

Captain EO: We’re gonna change the world, girl
[he can’t even be respectful enough to refer to the SL as her highness anymore…it’s straight up “girl”…we’re almost done at this point]

The Supreme Leader covers her ears and groans.
[…almost]

Okay, so nitty gritty—how much POWER does the character have? Does this change during the story?
Think about this. We don’t actually get an explanation as to what the SL has done that justifies an unwelcome invasion of her planet. All we get firsthand is Bog telling EO to “give her the gift.” What makes EO think she is so wicked, so ugly, so dangerous, that she needs to be changed so drastically? The presumption that she is “evil” is conjecture, based purely on her unconventional and “scary” appearance. There is a weird moment where all of the SL’s guards are also transformed. EO unleashes some electricity on them and a couple things happen. They no longer want to hurt him and they no longer look like themselves. In fact, they look kinda like…humans. What are we supposed to take away from this? On the surface, it appears that EO is “setting them free.” But why should we assume that him making creatures over in his own image is in fact “setting them free”?

Because that is what we have always been taught. THAT, my friends, is The Patriarchy. 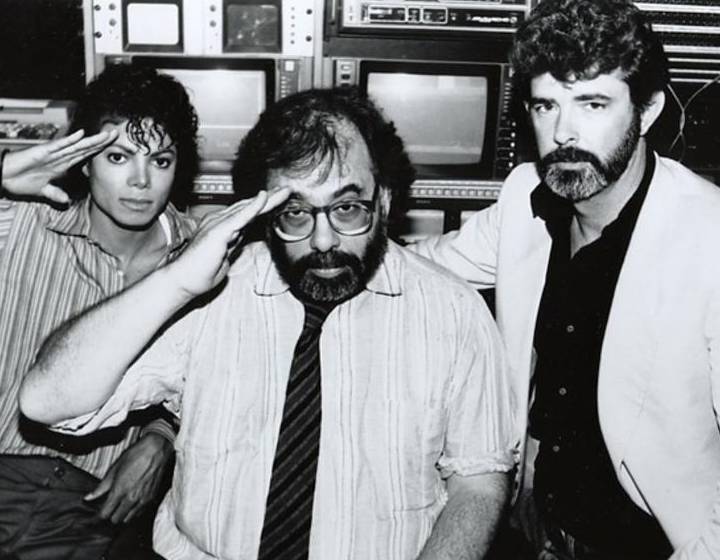 To get at the true underbelly of a character portrayal, you have to look not just at what they say and do but also (and maybe more so) what they DON’T say and do. Captain EO’s only female character—who is actually a powerful political figure before EO and the shitkickers show up—undergoes a transformation over the course of the story. While we may never know what her presumed “crime” may have been, we DO know (because we see it firsthand) that EO changes her appearance, her whole flippin’ crib, and he quite literally takes away her voice. In doing so, he takes away her power and succeeds in reasserting the traditional pillars of the Patriarchy.

Then there are the scariest questions, the Parallax questions. Who created this and why? Who is materially benefiting from it? Who is the intended audience? What assumptions does the content make about their interests?

We’re not going to get into these questions today. Keep your thoughts percolating on it though because they are important fucking questions. And we’ll get to them in Part 2.

Thanks for dipping into the sauce and remember to keep your feminist ears open for those burritos being unwrapped.